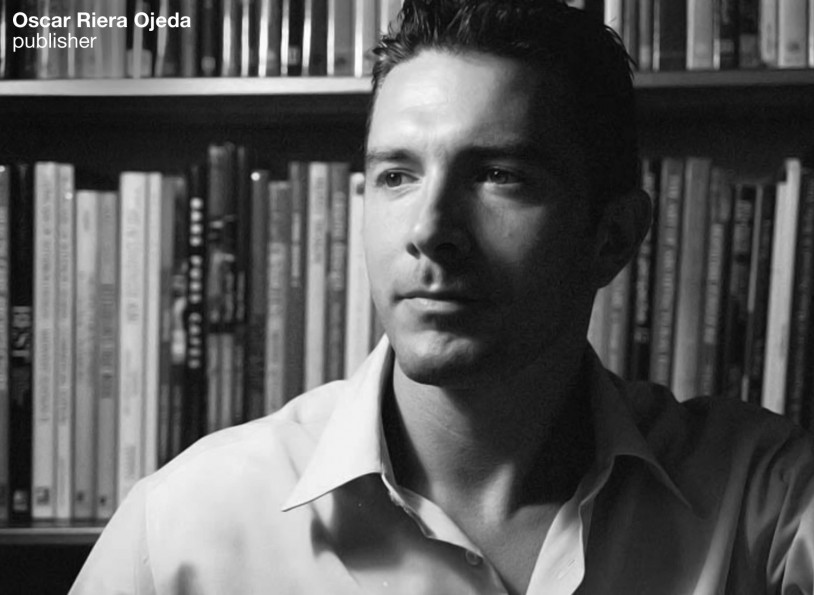 Our team is made up of multi-faceted professionals from all across the world. From editors, writers, graphic designers, photographers, We are proud of our ability to meet different challenges on many fronts with dedication, hard work and excellence.

Oscar Riera Ojeda is an editor and designer based in the US, China, and Argentina. Born in 1966, in Buenos Aires, he moved to the United States in 1990. Since then he has published over two hundred books, assembling a remarkable body of work notable for its thoroughness of content, timeless character, and sophisticated and innovative craftsmanship. Oscar Riera Ojeda’s books have been published by many prestigious publishing houses across the world, including Birkhäuser, Byggförlaget, The Monacelli Press, Gustavo Gili, Thames & Hudson, Rizzoli, Damiani, Page One, ORO editions, Whitney Library of Design, and Taschen. Oscar Riera Ojeda is also the creator of numerous architectural book series, including Ten Houses, Contemporary World Architects, The New American House and The New American Apartment, Architecture in Detail, and Single Building. His work has received many international awards, in-depth reviews, and citations. He is a regular contributor and consultant for several publications in the field.

Joseph J. Pasky has worked in the printing industry for more than 35 years. He earned a Bachelor of Science degree, summa cum laude, from Rochester (NY) Institute of Technology, School of Printing, and has done Masters work in color reproduction. He has worked as corporate project engineer for some of the largest and most prestigious printers in the U.S. to develop improved production methods that would incorporate latest technology to maximize quality and efficiency. For the past 8 years, Joseph has lived/worked in Shenzhen, China as a consultant to US and Asian printing companies. He was also the first G7 Expert in Asia and has trained many Chinese printers to use the G7 method to achieve and maintain ISO compliance in their printing process. He works with many US print buyers and art-book publishers in the US to supervise their manufacturing in China to assure the highest quality printing from their suppliers. Joseph is a member of the Technical Association of the Graphic Arts (TAGA). He is also an expert in SystemBrunner and FOGRA methods having worked with these process standardization methods for more than 30-years. Joseph currently manages several printing and production projects for Oscar Riera Ojeda Publishers.

Bernardo Irigoyen is a web developer, photographer and photo retouching artist from Buenos Aires. He manages and works in Estudio GC, a 17 year-old Graphic, Web & Photo Retouching Studio located in Argentina. He has a long trajectory and some of his  clients are BBDO, JWT, Ford Argentina, Renault Argentina, Chandon, Arcor. He manages the development and programming of all Oscar Riera Ojeda Publishers, and Oscar Riera Ojeda Studio websites and digital requirements.

Annie Zheng was born in Chongqing City, China and earned a degree from Chongqing Pedagogical College with a Major in English Education. She holds a teaching certificate and taught in her hometown high school for 2 years. Annie then moved to Shenzhen where she worked for a manufacturing company in the production and logistics office. Annie then worked in the purchasing department at 9-Stars printing company in the purchasing department. For the past year, Annie has been an office manager for Cathay Consulting Company and now a production coordinator for Oscar Riera Ojeda Publishers.

Daniel Cazap is an Architect graduated from Universidad de Buenos Aires in 2009. In the private sector he has worked extensively in the high-rise residential typology, mainly through his collaboration at Estudio Aisenson, one of Buenos Aires’ biggest architectural firms. In the public sphere he serves as a sustainability & built environment advisor at his city’s legislature. Alongside he also works at Universidad de Belgrano and Universidad Torcuato Di Tella as a professor and course coordinator respectively. Regarding the third sector, he volunteers at Argentina Green Building Council developing education and awareness initiatives.

Brigette Brown is a writer, editor, and design critic. She holds a Master of Fine Arts degree in Design Criticism from the School of Visual Arts in New York City and a Bachelor of Art degree in Studio Art-Graphic Design from California State University, Long Beach. Brigette has completed editorial work for several publications, cultural institutions, and schools including the Museum of Latin American Art, CSULB’s University Art museum, Domus, jovis Verlag, Gestalten, the Los Angeles Forum for Architecture and Urban Design, and eVolo. You can find her published work in Surface, Disegno, the Los Angeles Review of Books, UnBeige, Architizer, and Taking the Lane. Since 2013, Brigette has served as a guest critic for the Art Center College of Design’s Media Design Practices MFA program.